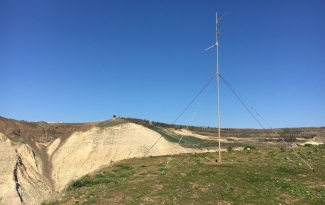 How can we know what a terrorist, hiding in the mountains of Indonesia, is up to; or the reason for an illegal immigrant sneaking into Latvia; or the situation at a Columbian oil rig? Finding the answers to these and similar questions, most of them related to border security, is all part of a day’s work at Defendec - an Estonian defence sector company.

“I sincerely believe that Estonia is a safer place thanks to us. I believe that our borders are better guarded now than they would be without us,” says Jaanus Tamm, CEO of Defendec, a company that has been providing innovative border security solutions for years. While this may sound boastful at first, it is true that this company, which has provided solutions to 30 countries all over the world and whose services are used by the border guards of almost 20 countries, has reason to be proud. This is especially true considering the fact that the company, now a significant player in the defence sector, was started by a small group of students from the University of Tartu and the Tallinn University of Technology.

“We were three young guys eager to change the world; we had smart dust technology and the competences we developed at TUT. We assembled a team and looked for an opportunity where our technology could be the most beneficial. We ended up with the Estonian border guards, who said they would be very happy to have eyes on the border while their body was back in the cordon. Our first goal was to decrease the need for people to physically go and check the border, or when gathering evidence about illegal border activities. We developed working solutions, but as the border of Estonia is rather short in the global context, we started to look at the rest of the world - where there is approximately 250,000 km of land borders, most of which is unprotected,” Tamm said, talking about the company’s early years, adding that as Estonian border guards were very happy with the results, they recommended the firm to their colleagues in Europe.

“Our system is used for a large variety of purposes. We are, for example, guarding oil pipes in Columbia, and power lines on the Balkans; while in Indonesia the system is used, not for guarding borders but, for carrying out anti-terrorist operations. There are several terrorist organisations hiding in the mountains of the island state, and the defence forces want to keep an eye on their movements,” Tamm explained.

The head of the company explained that, when looking at border security systems in general, there are manned patrols, walls and fences, and various sensors and cameras. However, all of these have good and bad sides, and Defendec is trying to learn from each to come up with an optimal solution. Thus, the firm has created a smart low-energy 'camera' that can be installed anywhere in the world.

“Detection and surveillance are equally important, therefore we're working towards offering systematic solutions. We also try to integrate technologies, but this presents its own challenges as different devices may not work together and the software of different producers may not be compatible,” said Tamm, explaining the challenges of border security technologies.

However, the company sees challenges as opportunities, and they have a clear vision for the future: to make border security as autonomous and automated as possible. They also want to add and customize all kinds of software and hardware, products, and ideas to help them carry out this mission. “We believe that simply patrolling is outdated, and that border guards could instead spend their time on intelligence work or catching traders and middlemen. We also believe that building walls and fences in large volumes is neither efficient nor reasonable. There are regions where they are unavoidable, where specific groups have to be kept back, but on the whole, building a wall along an entire border - we do not see this as a reasonable thing to do,” Tamm said, adding that their primary focus is on the countries of the former Soviet Union, Central Asia, the Middle East and other similar regions where land borders are still mostly guarded by manned patrols.

Ingvar Pärnamäe, the head of the Estonian Defence and Security Industry Innovation Cluster has said that Defendec's success story, which took off thanks to the testing and use of the Estonian border guards, has become an example and encouragement for other defence industry companies trying to conquer international markets. “The work that Defendec has already completed and the projects they are developing make our voice heard in matters related to state defence on the global arena. The fact that an Estonian company is working together with American partners to guard the Afghanistan-Tajikistan border, for instance, gives credit to the company as well as the defence industry sector as a whole,” Pärnamäe said.

While Defendec's products have several advantages over those of their competitors, they are, in a broader sense, competing with every alternative border system. “It is true that we compete with every alternative border system, such as walls, cameras etc., but when a customer requires a visual detection system at a remote land border, the choice is pretty straightforward. As the price per detection we offer is the lowest, they often pick us from among the alternatives,” Tamm explained.