Alongside Norway, Finland is home to the world’s first fully electrical car ferries 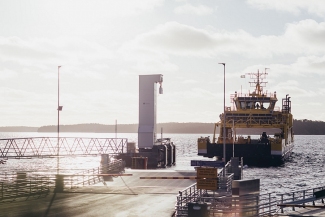 First full electric ferry Ampere was launched in Norway 2 years ago. Quiet, elegant and comfortable electric vessel which transports passengers and their cars safely between Parainen and Nauvo in the Finnish Archipelago started now in Finland.

Most people associate Finland with saunas, the midnight sun, coffee of a strength that would command the respect of even the most intrepid Italian, and a marked awareness of environmental issues among its population. Finland is among those countries of the world which have focused on and achieved the successful generation of clean, renewable energy. So it comes as no surprise that the land of the Northern Lights is also home to the first battery-propelled ferries – which are powered with the aid of Siemens technology.

As long ago as 2015, Siemens supplied the propulsion system for the “Ampere”, the world’s first all-electric ferry. Since then, the “Ampere” has welcomed new family members to the fold, including the “Electra”.

In theory and practice

The new vessel was introduced in Turku. By way of an introduction on the first day of the trip, Head of Marine & Shipbuilding at Siemens Norway Odd Moen and CEO of FinFerries Mats Rosin presented the Siemens digitalization concept for shipbuilding and the “Elektra”, Finland’s first battery-powered car ferry. “The Elektra is part of a fleet now numbering four fully electrically propelled ferries run by the shipping company FinFerries which are equipped with our BlueDrive Plus C propulsion concept,” explained Odd Moen. “This encompasses a power storage system, a warning and observation system and variable-speed propulsion technology for the propellers. The batteries are charged as long as the vessel is docked – using electricity produced from hydroelectric power.”

Anyone who has any experience of this idyllic country in the North of Europe will know that the winters here are long and hard. If the ferry should ever need to make headway through ice, a supporting diesel engine can be additionally deployed if necessary. This hybrid solution provides the passengers with the assurance that they will arrive on schedule however tough the ambient conditions.

Pioneering work to benefit the environment

The ferry offers capacity for around 90 cars and travels daily at regular intervals between Parainen und Nauvo. During the crossing, which took around 1.5 hours, Odd Moen and Mats Rosin gave a guided tour of the ferry complete with an insight into its complex and ultra-modern technology.

“Battery-powered ferries are vital to the achievement of sustainable, efficient and reliable shipping”, sums up Mats Rosin. “We’re proud to have accomplished something of a pioneering achievement with the ferries of our electric fleet thanks to Siemens, and we’re excited about the possibilities afforded by these green technologies.”