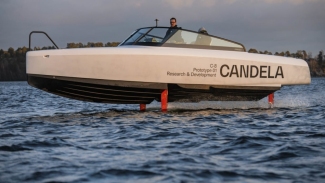 The world’s most anticipated electric boat has completed its maiden flight. The foiling Candela C-8 promises to disrupt the gas-guzzling powerboat industry, thanks to a unique combination of long all-electric range, high speed, and industry-first features.

After 16 months of intense development, the most ordered electric boat ever took off from the cold waters outside the Swedish tech company’s headquarters at Lidingö, Stockholm.

After reaching its designed take-off speed of 16 knots, the Candela C-8 prototype P-01 lifted off smoothly, and flew noiselessly above the water at a cruise speed of 20 knots.

- This first flight marks a huge moment not only for Candela, but also for the powerboat industry. The C-8 is not only designed to be the best electric boat, it is designed to be a far better experience than conventional powerboats. I hope we can drive the transition to emission-free boating at a very fast pace.

With Candela C-8, the Swedish tech company strives to disrupt waterborne transport by offering an electric boat that is better than ICE competitors, in all respects.

The transition to zero-emission boats has been hampered by the inadequate performance of conventional electric boats. Propelling a planing, conventional speedboat through the water requires enormous amounts of energy, which drains even the biggest lithium-ion batteries after only 30-45 minutes of spirited driving.

Flying above the waves on computer-controlled hydrofoils – underwater wings – Candela’s craft use 80% less energy than conventional boats, which translates into far longer range and higher speeds on pure battery power.

What makes hydrofoils so effective is the dramatic reduction in drag. A typical planing hull has a 4-to-1 lift-to-drag ratio, while the Candela C-8 has a 20-to-1 lift advantage. Cruising at 20 knots, the C-8 can fly for 50 nautical miles on its 44 kWh battery – 2-3 times longer than conventional electric speedboats with 300% bigger batteries.

But the C-8 offers other and new benefits over any other boat.

The C-8’s digital Flight control system automatically adjusts the foils to keep the boat level and steady, even in adverse weather conditions. The ride is silky smooth in choppy waves and side winds. The low energy usage directly translates into an almost non-existent wake. And the ride is silent, thanks to Candela's newly developed Candela C-POD direct-drive electric pod motor.

In an industry-first for leisure boats, the C-8 is equipped with fly-by-wire steering and has Autopilot features for more relaxed driving over long distances. When the driver lets go of the wheel, the boat will automatically steer the set compass course. More features will follow as the C-8 is upgradeable Over-The-Air.

The Swedish tech company has refined its hydrofoil technology and Flight control software since the open sportsboat Candela C-7 was introduced in 2019. With experience from the C-7, Candela’s 70+ engineers and technicians have designed the C-8 for rapid mass production, targeting a rate of 400 units per year in 2024.

Candela has received more than 100 orders since launching the C-8 concept last fall, which makes it the best-selling electric boat model in Europe, even outselling most other 28-foot ICE boats in the premium (290 000€) category.