Integrity: Can you really trust your GPS position? 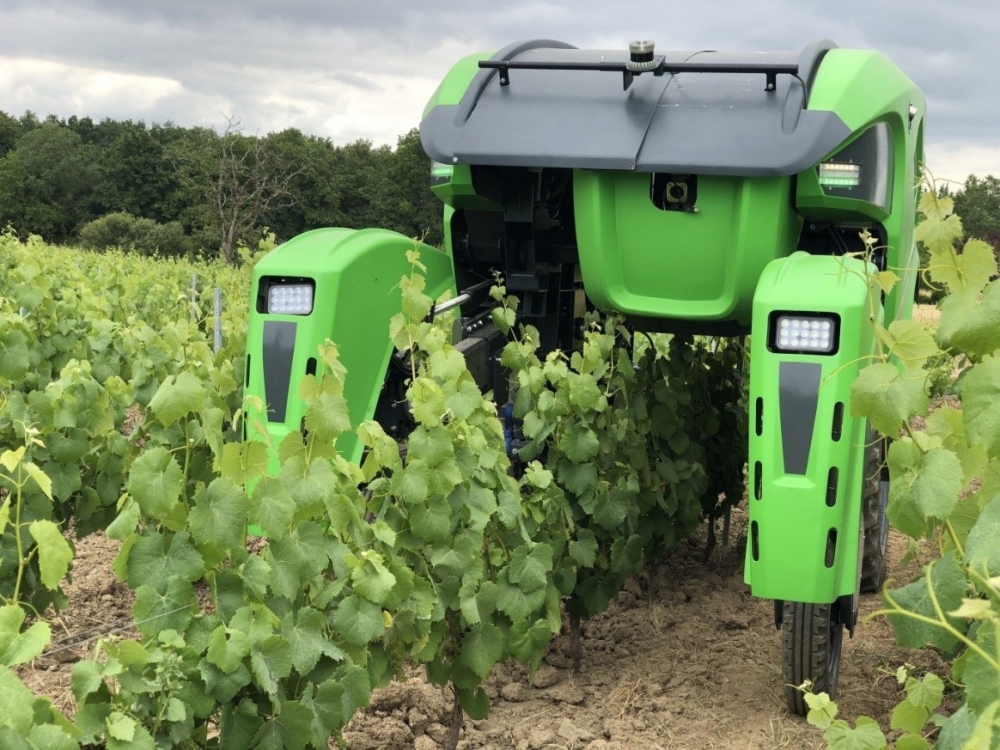 A French vineyard in the Loire valley is a beautiful sight, but the farm has trouble recruiting workers to weed their organically grown grapes. The young generation has moved to the cities leaving urban communities short on workforce. Solution: a fully autonomous tractor, developed by a French-based company Sitia, working tirelessly to weed the narrow rows between the grape vines. After a full month of weeding and hundreds of kilometers covered, Sitia approached the farmer to review the work done, and reimburse 2 grape vines, which were damaged during the month of operation. They were surprised to hear the farmer exclaim, “When I use my manual tractor to get the same job done, I damage at least two vines a day! How did your robot manage to be so careful?”. A high level of accuracy and integrity ensures high quality of autonomous operation.

But what exactly is integrity of positioning and how does it affect the performance and reliability of robots and other autonomous machines? Integrity is the truthfulness of positioning and positioning accuracy information, even if it means showing that the current position information is not as accurate as desired in a certain challenging environment. A part of delivering high integrity positioning is a statistical analysis called RAIM or RAIM+, where the latter takes this analysis to the next level as part of a larger positioning protection package.

Why is integrity critical for automation?

Let us take a closer look at GNSS receiver integrity in the sense of truthful reporting of possible positioning inaccuracies, and how overly optimistic reporting can result in hazardous autonomous operation. Reporting of receiver accuracy is done through positioning uncertainty, which is the maximum possible error on the calculated position. It gives a sense of risk of a positioning error especially necessary in challenging GNSS environments where the receiver “sees” only a limited number of GNSS satellites or where GNSS signals are degraded. Such error reporting is important for all autonomous machines, but especially for assured PNT applications and mission critical operations. Keep in mind that a consistent position may look accurate but could still be incorrect. The positioning uncertainty gives an indication to which extent you can rely on the positioning accuracy at any given moment.

The blue line on the diagram below shows position uncertainty estimated by a GNSS receiver under favorable conditions, when the view of the sky is unobstructed, and the receiver has a direct line-of-sight to many satellites. The receiver operator can set an alarm limit (shown in red), so that the receiver can flag situations when positioning uncertainty becomes too large. 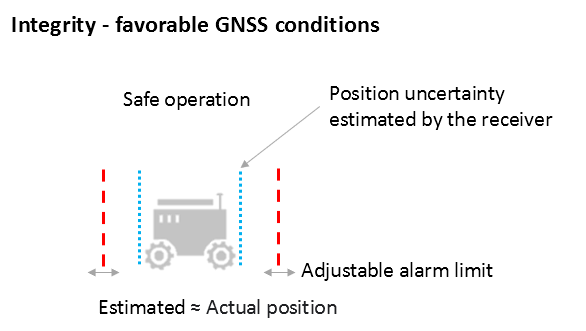 Figure 1: Under good GNSS conditions, the position uncertainty, shown by the blue lines is well within the alarm limits, indicating safe operation. The actual position of the receiver should always remain within the blue uncertainty boundaries.  ©Septentrio

During favorable conditions the positioning uncertainty stays well below the alarm limit because the calculated position is almost the same as the actual position of the robot. However, in challenging environments the truthfulness of positioning uncertainty becomes most critical (see Figure 2). For instance, when the view of the sky is partially obstructed by buildings or foliage, the receiver has access to only a limited number of GNSS satellites, making it harder to calculate accurate position. In such cases the receiver must report a higher positioning uncertainty, so that the system can take adequate action such as switching to lower speeds, staying further away from predefined boundaries, or stopping.

Figure 2: In challenging environments receivers with high integrity report large positioning uncertainty, flagging possible inaccuracies to the system. If the receiver is too optimistic about its accuracy, the operation becomes hazardous.  ©Septentrio

A low integrity receiver may keep reporting an optimistic positioning uncertainty, that stays below the preset alarm limit even when the calculated position is way off from the actual position. The number may look fine, but effectively it becomes a “robot on the loose”, no longer on its planned path with a risk of damaging itself and its surroundings.

Figure 3: In an urban canyon car test the Septentrio receiver reports truthful position uncertainty. A competitor receiver seems to be more accurate, while the actual position is not even within the reported uncertainty boundaries, resulting in hazardous operation.   ©Septentrio

If the receiver depicted by the red line would provide navigational information for an ADAS automotive system, for example, this could mislead the system into thinking that the car switched lanes. If the system would then attempt to correct the trajectory by switching back to the “correct lane” this would result in taking the car off course and potentially hitting the sidewalk or even another car.

The underlying mechanism behind truthful positioning uncertainty reporting is RAIM (Receiver Autonomous Integrity Monitoring), which ensures truthful positioning calculation based on statistical analysis and exclusion of any outlier satellites or signals. Septentrio receivers are designed for high integrity and take RAIM to the next level with RAIM+, guaranteeing truthfulness of positioning with a high degree of confidence. In Septentrio receivers RAIM+ is actually a component of a comprehensive receiver protection suite called GNSS+ comprising positioning protection on various levels including AIM+ anti-jamming and anti-spoofing, IONO+ resilience to ionospheric scintillations and APME+ multipath mitigation.

The Septentrio RAIM+ statistical model has been fine-tuned with over 50 terrabytes of field data collected over 20 years. It removes satellites and signals which may give errors due to multipath reflection, solar ionospheric activity, jamming and spoofing, while working together with the GNSS+ components mentioned above. Because of this multi-component protection architecture, it achieves a very high level of positioning accuracy and reliability which goes well beyond the standard RAIM. The RAIM+ statistical model is adaptive, highly detailed and complete, taking advantage of all available GNSS constellations and signals. The full RAIM+ functionality is even available in Septentrio’s GNSS/INS receiver line. User controlled parameters allow it to be tuned to specific requirements.

The diagram below shows RAIM+ in action during a jamming and spoofing attack on a Septentrio GNSS receiver. While AIM+ removes the effects of GNSS jamming, both AIM+ and RAIM+ work together to block the spoofing attack. Satellites with high distance errors, shown on the middle graph, are removed by RAIM+ since they do not conform to the expected satellite distance. 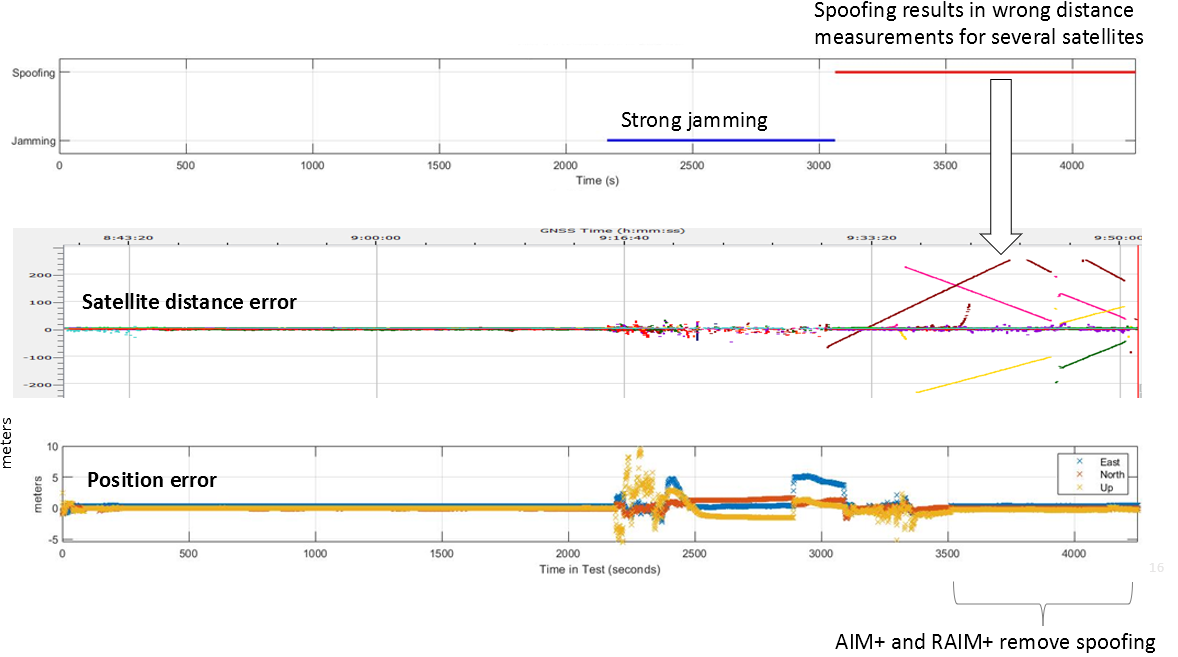 Figure 4: In this scenario jamming gives satellite distance errors but is countered by AIM+ technology. During spoofing AIM+ eliminates some of the spoofed satellites, while other satellites that have wrong distances are dismissed by RAIM+ algorithms.  ©Septentrio

This example shows that even in the case of jamming and spoofing, Septentrio’s high integrity receiver technology delivers truthful and reliable positioning that any autonomous system can count on.

GNSS receivers designed to be reliable strive for high integrity in both reporting of the positioning uncertainty as well as in RAIM+ advanced statistical modelling. This ensures that these receivers provide truthful and timely warning messages and are resilient in various challenging environments. Other technologies such as INS (Inertial Navigation System) can also be coupled to the GNSS receiver to extend positioning availability even during short GNSS outages. Quality indicators for satellite signals, CPU status, base-station quality and overall quality allow monitoring of positioning reliability at any given time. High-integrity GNSS receivers provide truthful positioning in autonomous machines such as the Sitia weeding tractor. They are also crucial components in safety-critical applications, assured PNT and any other application where accuracy and reliability matters. 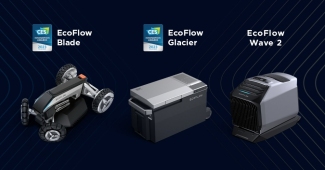