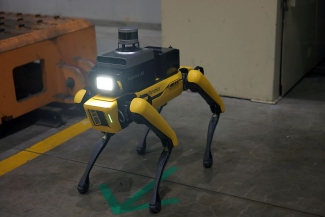 Hyundai Motor Group (the Group) introduced ‘Factory Safety Service Robot (hereafter referred to as the Robot)’, a robot for industrial site safety, and announced its pilot operation at Kia’s plant in South Korea. The Group has also released a video of the Robot on its YouTube channel.

With an integrated thermal camera and 3D LiDAR, the Robot is able to detect persons around it, monitor high-temperature situations and potential fire hazards, and perceive whether a door is open or closed. The Robot can be remote-controlled through a secure webpage that provides a livestream of its movements around the plant, enabling office personnel to remotely observe industrial areas. The Robot’s AI technology also allows the Robot to detect dangers and send alarms to managers through the secure webpage.

Based on these functions, the Robot provides real-time sharing of photos of on-site situations and an activity log with the control center as well as support a rapid response in the event of an emergency by sounding an alarm on the control webpage. Managers can switch to manual teleoperation whenever needed to conduct a closer look at important industrial sites. It is also possible to connect multiple Factory Service Safety Robots to the control system to simultaneously check various zones.

The quadruped robot is able to navigate through narrow spaces as well as identify blind areas that are hard to see with the human eye. Applying the Group’s technologies to Boston Dynamic’s Spot robot also provides the Robot with enhanced autonomy features. Based on the Group’s experience with development of service robots, the Robot is equipped with diverse technologies suitable for autonomous patrol services within industrial site environments, including task management and deep learning-based vision technology.

The Group has applied several of its own technologies to the Robot, including AI for detecting people, thermal camera for detecting high-temperature risks, LiDAR for recognizing door openings, and  navigation technology that allows it to move autonomously along designated areas within industrial sites—all of which can be expanded to other types of mobile robot platforms.

Through the pilot operation at Kia’s plant in South Korea, the Group will use the Robot to support late-night security patrols and create a safer environment for workers. The Group will also go through the Robot’s proof of concept and assess its effectiveness as well as its applicability before expanding its patrol areas and reviewing additional deployment to other industrial sites.