The AI Basketball Robot CUE4 Attempts to Join a B. League All-Star Game 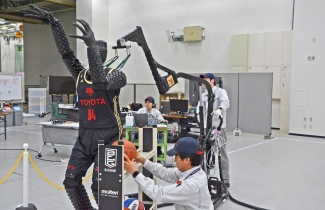 CUE is an AI basketball-playing robot that scores 100 out of 100 shots, developed by Toyota volunteers in their free time. The development team working on the project as real work, scheduled until 2020, unveiled CUE4, the fourth generation, at the end of 2019.

"Novices attempting the impossible from scratch"―This is the third installment of this special in-house project.

CUE is being developed by the AI Athlete Robot Development Group, Frontier Research Center. However, CUE has its roots in an event hosted by the Toyota Engineering Society, Toyota's oldest in-house volunteer organization. The theme of the event was "Absolute beginners take up the challenge of developing AI from scratch." AI, which stands for "Artificial Intelligence," refers to artificial systems that make decisions and carry out tasks using human-like intelligence; for this reason, AI has to "learn" in the same way as humans. The team members soon began studying AI, but they had no idea what or how much to study. When discussing how much to study, one of the team members uttered a phrase used by Hanamichi Sakuragi, the protagonist of the renowned basketball comic, SLAM DUNK: "Will 20,000 practice shots be enough?" This led to the following idea: "Wouldn't it be amazing if we developed a robot that could use AI to calculate the distance to the goal by itself, and sink 100 percent of its shots?" And this was the exact moment that development of CUE began.

Early in January 2020, in recognition of previous activities, CUE4 was formally selected for the B. League All-Star Game, and it gained the opportunity to perform in the three-point shootout.

The development team approached CUE4's development by clarifying issues in preparing to compete in the three-point shootout. In order to realize swift movement, the power and communication cables previously connected to the robot needed to be eliminated, and it was necessary to develop and install a small, powerful specialized motor.

Also, the swaying of the robot after a shoot has a large impact on shoot accuracy. The team required realization of optimal shooting movement to both control swaying and achieve successive shoots. In addition to above challenges, to resolve other various issues, development required total revision of everything, from the sensors and internal framework through to the AI algorithms.

On the day of the main match, the stadium was packed to capacity. (Tickets for the All-Star Game apparently sold out in two minutes.) The MC made an announcement and CUE4 appeared on-screen. During rehearsals the day before, for some reason CUE4 was unable to score even a single goal, could not grip the ball at all, but somehow the team had it ready for the main event. Now was the time to make or break it.

Dressed in an All-Star's uniform, CUE4 reached for the first ball.

How everything went, see from the video: